The First Fleet of 11 ships arrived at Botany Bay after a 252 day voyage carrying over 1,000 passengers including 586 male convicts, 192 women convicts and wives and 213 marines plus some of their wives and children.

All 11 ships arrived within two days of each other.

There was hardly any loss of life.

The 16,000 mile (25,750km) voyage, made at the speed of a man walking, eventually settled in what Captain Arthur Phillip called Sydney Cove, very close to what is now Circular Quay.

So ended one of the great nautical achievements of the modern world.

So many books have been written about the First Fleet, its arrival at Sydney Cove and what followed in the next few years, it’s difficult to discern between fact and fiction.

Charles Wilson, in Australia: The Creation of a Nation, rails against the ‘inefficiency, carelessness and idleness of the masters and servants of the ministries which all had a finger in the pie called the First Fleet.’

Its fate rested, he asserts, ‘with an ill-chosen, ill-organised, contentious and unwilling body of what passed for public servants … and a venal and corrupt body of private contractors.’

The stereotype is the infant colony of New South Wales was a terrestrial hell to which were assigned the socially damned by an uncaring government who only wanted to solve their crime problem as cheaply as possible without concern for human life.

The First Fleet was one of the most successful voyages in modern maritime history.

So how did these writers come to the conclusion the organisation, the trip and the settlement were such a disaster?

Dr Piggin said the letter announcing New South Wales was to be settled by convicts was signed by Lord Sydney, British Home Secretary, on 21 August 1786.

Sydney decreed the new colony was not to be a military prison, but a civil administration, recognising the property rights of convicts.

Captain Phillip who then became Governor of the new colony also laid a humane foundation to the colony with his declaration that ‘there can be no slavery in a free land and consequently no slaves.’

His humanity extended to the Aboriginal people: he ordered there was to be no pay-back when he was himself speared at Manly by an Indigenous warrior.

Phillip was himself quite capable of envisioning a great future for the infant colony. He wanted to call it ‘New Albion,’ and a sketch he commissioned in July 1788 incorporating his plans for Sydney Cove, showed wide streets and a church and hospital at the centre of the future town.

Dr Piggin wrote a great deal more about how many of the controllers of various parts of the organisation for the First Fleet were humanitarian Christians however space precludes me from naming them and their backgrounds however some are included.

The contractor for the First Fleet was William Richards Jr, an evangelical Christian. Far from being ‘venal’ and ‘corrupt,’ he honoured his contract with the government both in spirit and in the letter. He ensured convicts and marines on the First Fleet were so well provisioned they became healthier (heavier anyway) as the voyage proceeded.

He was subsequently engaged to transport 100 convict women on the Lady Juliana, and they arrived ‘healthier and happier than they had ever been in their lives.’

For the second and third fleets, by contrast, the contractor was Camden, Calvert and King, a firm engaged in the slave trade. They were both disasters: 267 of the 1006 convicts on the second fleet perished and the death rate on the third fleet was twice that of the first fleet.

So William Richards was re-engaged as the contractor for the three ships which arrived in 1792 after the third fleet, when only one life was lost.

The Forces of Humanity at Sydney Cove 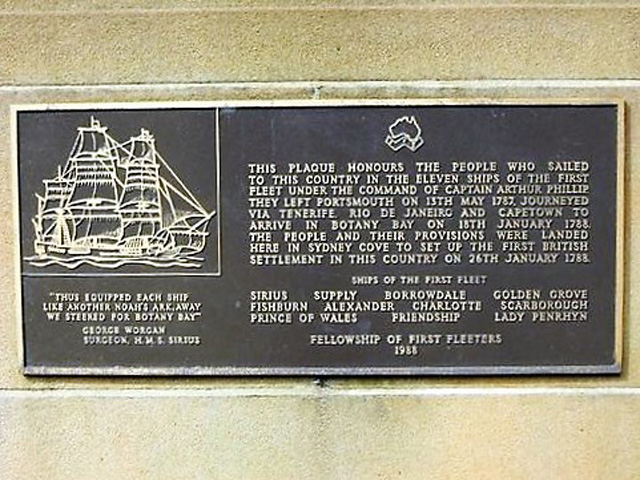 Chaplain Johnson and his wife Mary were not the only representatives of vital Christianity and humane civilisation in the new colony. Among the devout Christians were also two future governors of the Colony: Captain John Hunter, who was 2ic to Governor Phillip and became governor of the colony from 1795 to 1800 and Lt Philip Gidley King, destined to follow Hunter as governor from 1800 to 1806.

But the most truly remarkable of the First Fleet’s contingent was Lieutenant William Dawes. He befriended the Indigenous Eora people and attempted to learn their language. His notebooks have survived and they reveal his wonder at aspects of Aboriginal culture and his sensitivity to their plight. He also became the first person appointed by the Church Missionary Society to teach its prospective missionaries.

The year 2014 was the bicentenary of the death of Arthur Phillip. Monuments to him were unveiled in St James’ Church, King Street, Sydney and in Westminster Abbey. His essential, if not perfect, humanity makes him worthy of the honour. However, he was neither alone, nor even pre-eminent, among the long line of humane founders of the Botany Bay experiment.

Charles Middleton (1726-1813), Comptroller of the Navy Board was responsible for finding the eleven ships of the First Fleet, only one of which was more than six years old and supervised their fitting out and their equipping with stores and provisions. He hated corruption and there was no doubting his contribution to the success of the First Fleet.

He used religion as his instrument and believed; ‘Without religion there can be no public principle.’

John Skinner is a retired journalist who has written ten biographies on famous campdrafting competitors. He was an Australian infantry soldier wounded in Vietnam, served six years as a Police Officer, was CEO of the then Australian Rough Riders Assn (Pro-Rodeo based in Warwick, Qld). He and his wife Marion retired to a small farm 25km south of Warwick 20 years ago. They have three children and now seven grandchildren.