Over the past few weeks I've managed to go to more cricket matches than I had in the past 12 months, and thanks to the generosity of a friend, I did so in style. There is something about the Members area of the MCG that I enjoy.

It could be the feeling of exclusivity one gets, and that probably says something about my innate snobbery, but I prefer to think that is the air of history that wafts through the stands and hallways, bringing the faint aroma of bygone days.

On the walls hang portraits of athletes and teams long since gone to dust, looking down with what one hopes is approval on the crowds still thronging to witness new names and new records. If sport is a religion in Australia, then the MCG is the greatest of its temples, hallowed ground where a number of faiths—ooops, I mean sports—mingle, all with their own traditions and rites.

Nothing new under the sun

I've always loved the fact that, of all sports, cricket is perhaps the one most in touch with its history. So, it might seem strange that the last two games I have been to were a One Day International and a Big Bash game. But, any real follower of cricket knows that the only constant is change and an inbuilt resistance to new things that soon gives way to pragmatic acceptance, from the scandals of that new fangled over arm bowling to the idea of a different colour ball.

I have no issue with the way that we are seeing cricket evolve and mutate to suit a changing world. Sure, some of the various gimmicks don't really excite me all that much, but I can appreciate the different skills involved in different formats, and feel no need to denigrate one form to defend another. I will always consider Test cricket the highest form of the game, and care more about Jack Hobbs than David Warner, but I am grateful for the fresh vitality and new fans T20 is bringing to the game.

Sitting at the Big Bash game with my friend and his two boys, one eight, the other ten, I had to admire how clever a concept it is. In a world where time is money, the length of the game makes it perfect for families, and its fast pace makes it a perfect introduction for those new to the game. Let's be honest, Test cricket is a tough sell at times when people aren't predisposed to the game.

The focus is on entertainment, and after being to a baseball game in the United States, I could pick out the common elements—the music, the firework, and the lack of downtime in which to get bored. There was always something happening, which seemed to make it particularly suited to bringing children a long!

None of this is bad in itself, in fact it was a whole lot of fun. But, I think that there is one aspect to competitions like the BBL that will only become more of a problem as time passes, and—unlike flashing stumps or miked up players—does actually threaten to take it away from what has made cricket such a wonderful sport. And, to find a parallel we can point to a much closer sport than baseball, a sport that has almost much claim to the MCG as cricket— Aussie Rules.

For a long time, the great players of AFL were inextricably linked to the clubs for which they played. If you said Ted Whitten, you would think of the Bulldogs, Gary Ablett (Sr or course) you meant Geelong, and the ultimate Shinboner, Glenn Archer, could never be anything but a Kangaroo. But, over the past few decades, we've seen more and more that club loyalty is no longer as binding as it once was.

As I have said before, you can't blame players wanting to extend their career—especially when clubs treat them like commodities, but it has created a tension between club loyalty and following a player. If you grew up in Perth and, all your life, wanted to play for West Coast like your hero Chris Judd, what did you do when he moved to Carlton? It's always something I have struggled with, but at least in AFL it doesn't generally happen every season so you have time to adjust.

As a game built on continuity, cricket has always had a stability to it that other sports have lacked. While there were the occasional exception, it was very rare to see a player move around and, when they did, they generally put down roots. But, the nature of T20 cricket has created a new breed of fly in, fly out cricketer, and sometimes you get the feeling they don't care who they are playing for, just what they are getting paid for. And if they don't care, why should we?

It may just be the stuffy traditionalist inside me, but there is something wrong with seeing someone like Michael Klinger, who is so identified with South Australian cricket, turning out for another star, or Brad Hogg suddenly sticking his tongue out in the service of a East Coast franchise. I have enjoyed the cricket that has been on show, but I haven't really been invested in whether a particular team wins or not. I just turn on the TV and pick a team to support.

The closest I have to a BBL team is the Stars, and that is only because a player I like plays for them, but what happens when he moves on to another franchise? Unlike national or state (or county or province), BBL teams have no tradition to create loyal followers, and I suspect we are entering the era of fans following players, not teams. The franchises are working hard to build their fan base, but it will be an uphill battle—and it's something that threatens to change the nature of the game far more than coloured clothing ever could. 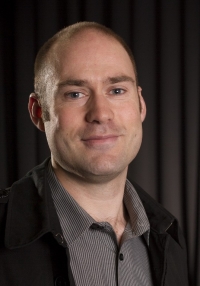 David Goodwin is the former Editor of The Salvation Army's magazine, On Fire. He is a freelance writer, and an unapologetic geek.

David Goodwin's archive of articles may be viewed at http://www.pressserviceinternational.org/david-goodwin.html