It's easy to run. Now, I'm not talking about going for a five-kilometre hike around the nearest lake. I've tried that and it's not easy. I only tried it once. No judgment please.

We run because that's how we learnt to survive. Cast your mind to Forrest Gump. As a young child, with braces on his legs and a stutter in his voice, boys teased him and threw rocks at him. What was his response? He did what most of us would do in that situation. He ran. He ran so fast, the braces broke off his legs and he developed speed. 'Run, Forrest, run!'

In those times it makes sense to run. Though, you might suggest, our coping mechanisms over the years have been to resort to a Forrest Gump mindset. Run. Correct me if I'm wrong, but I think, in difficult circumstances, our first inclination is to run.

That's because it is the easiest response.

I guarantee it is much easier to run than it is to stop, stay and sort it out. Collectively as a society, we run from lots of things:

Miley Cyrus said if Donald Trump became President of the United States of America, she would leave.

You get the picture.

I used to live in the Northern Territory. I know of people who have literally moved all the way from 'down south' to run from their families.

I know of a couple who moved churches (they changed denominations), because it appeared to be far too difficult to work through the issues at hand in their local church.

I know of families who have moved their children from schools because they could not sort out the ideological clash with a particular teacher.

There was a man, who I will call, Jay. Jay heard a whisper from God to travel to a local city and call the people to follow God. Anyone who hears such a whisper may be inclined to do what Jay did next.

He boarded a boat and left the city. There was no way Jay was going to complete such a ridiculous task. While on the boat, a violent storm arose and circumstances occurred such that found Jay overboard. He was now wrestling to stay afloat in the midst of the swirling waves and strong current.

Suddenly Jay was swallowed by a large fish. Jay spent three whole days in the belly of this fish. He did what all people would do if they were stuck inside a ginormous sea creature: pray!

Jay cried out to God.

The fish then vomited Jay out onto the sand. Feeling worse for wear, Jay stretched his weary body and stood up.

Then God whispered to him again, 'Go.' God called Jay once again to go to the city and call people to follow God. Jay reluctantly obliged and went.

Some of you know: This is the story of Jonah found in the Old Testament of the Bible. Jonah was called to fulfil a particular task, but instead, he ran.

'Escaping' comes at a cost

You can run from your situation, but that does not make your life easier. The issue you left still exists irrespective of how much you try to convince yourself it doesn't.

Overlay this with the God equation and your interest should be piqued. When God whispers something to you – watch out. You can run, but you can't hide. Psalm chapter 139, verses seven and eight says: 'Where can I go from your Spirit? Where can I flee from your presence? If I go up to the heavens, you are there; if I make my bed in the depths, you are there.'

God promises to always be with you. So you can't run. You can try. I mean, you can run, but God will still be with you.

No matter how difficult life gets, no matter how unpredictable and seemingly frustrating, one must realise that a Forrest Gump mindset is not the answer.

You might be able to try to run away from your problems, but this truth remains:

You can't run away from God 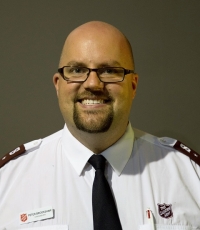 Pete Brookshaw is the Senior Minister of The Salvation Army Craigieburn. He has a Bachelor of Business and is passionate about the church being dynamic and effective in the world and creating communities of faith that are outward-focused, innovative, passionate about the lost and committed to societal change. He has been blogging since 2006 at www.petebrookshaw.com about leadership and faith.

Peter Brookshaw's previous articles may be viewed at http://www.pressserviceinternational.org/peter-brookshaw.html