At the end of last year in October, the city of Adelaide—my home city, experienced a state-wide blackout—which has never previously occurred to this degree.

This was primarily caused by bad weather doing some significant damage to our ageing infrastructure.

Beside other things, I found it quite interesting to read on social media and hear people's reactions to being without power for a period.

Outrage and disappointment directed at our utilities provider SA Power Networks and the government, jealousy of others getting their power back relatively quickly and so on. Even the likes of our government finger pointing before knowing the facts was interesting to observe.

In the context of history, we have only had electricity available for the likes of industry and the wealthy for just over 100 years; a lot less for general household use and I find it interesting we have become so dependent on this resource of convenience.

I am not referring to of course, the ability it has to provide us with the likes of medical resources in hospitals, communications and providing quality essential services, but I feel we really do take it for granted in everyday use.

At home, due to the nature of my qualifications, we are resourceful enough to ride out blacks outs for extended periods unscathed, but even if we only had candles and a fire pit, we would be completely happy with that. I love the creativity that is induced in my mind when a problem arises—finding creative alternatives to say, heat water for a shower. So while we do not have a place to complain in this instance, I regularly hear God's reminder of, 'To those whom much is given, much is expected' and we stay true to this by using our resources as best we can to help others.

Talking with several friends about how they endured the blackout, they said it was good as it brought them together—playing board games by candle light, cooking on a fire or barbeque, laughing and talking instead of everyone stuck on their entertainment technology of choice. And as the saying goes, there's usually a baby boom nine months after a blackout!

It also gives a chance for people to pull together and help each other out.

Some of our neighbours brought over some food to cook and eat under lighting, it was a good chance to give to something outside of ourselves and I have heard of several similar stories of people pulling together to help each other out—building community and sharing God's love.

I asked of God what is up with those people, including some Christians, who seem to get so irritated with the smallest hiccup in life—as in the context of the rest of the world, we have it pretty darn good here.

Those who live for themselves never seem to be truly happy—they never seem content with what they have for more than brief periods.

Christian or not, there are so many unhappy people trying to get more out of life.

'What can you do for me?' is very much the attitude to everyone and everything around them and when they don't get their own way, blame shifting and a whole soup of negative traits flows from them.

The response I felt from God over the coming days was 'because they have not died to themselves.'

I quickly found Bible verses which stood out in regards to this. Galatians chapter 5 verse 24 says, 'And those who belong to Jesus Christ have crucified the flesh with its passions and desires.'

To live is to die

So essentially, to live you must die to your worldly self. I observed and took note of people's attitudes over the following weeks and drew a few conclusions, namely that learning how to die to yourself and more importantly, keeping that old person dead is an important part of the Christian walk.

Those who have died to themselves are always much happier—I believe, as nothing material sways them. Their heart is not in the things of this world but of things eternal. Some of the most genuinely nice people I have met are like this; they don't expect anything from you and just enjoy your company.

Sure it's fine to have electricity, things and careers, but when these things take centre stage to the point you could not stand to lose them, you are immediately back into the life which will separate you from Christ. 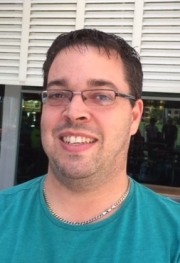 Michael Dahlenburg is an electronics engineer currently working in the ATM industry. He is non-denominational and has previously been involved in church plants and assisting those in ministry. His interests include; enjoying family, home DIY, gardening, most things tech-related and driving his wife crazy with a constant stream of inventions! You can view his blog site here: www.mickdahl.weebly.com

He lives with his wife Michelle and three children in God's own land of Southern Adelaide, Australia.