Being a Christian without likeminded friends can be difficult. Many Christians have or will experience this at some point, whether it is because they just got saved, moved to a new place or simply because all the suitable candidates seem to be nowhere in sight. In my case, I moved to a new country where everybody spoke another language and I was attending a mega church where I could not seem to find people my age.

Although I was making great friendships, especially with the other English speakers, I longed for the Christian fellowship that I had left behind upon moving to Colombia. Messaging them on WhatsApp was not the same as being around them and getting their encouragement and counsel on everyday matters.

In the book of Proverbs chapter 27 verse 17 it says "As iron sharpens iron, so a man sharpens the countenance of his friends." This is the verse usually used in church to encourage likeminded friendships, and used by parents to scold their children about their poor choice of friends.

Personally, I had heard this verse many times and was aware that though there were some exceptions, birds of a feather did in fact flock together. So although in my new friendships we shared our different perspectives and got along just fine, I was influenced by what they supported and found acceptable, just as they were influenced by what I did. Their influence by no means led me to the wild, "dark side" of life but I did begin to notice that the passion I once had concerning my faith was dulling.

A breath of fresh air

A couple weeks ago I sat next to two students at the lunch table. It was the first week of the English Immersion and every day we had been working from early morning to late evening intensively teaching English to a group of university students and teachers.

During the lunch break I was not usually the talkative type because that time often consisted of students asking me tons of questions in rapid, excited Spanish which was not ideal when all I really wanted to do was take a nap. However, this particular day was different; the young man next to me bowed his head doing what I assumed was praying, but afterwards opened his eyes and gazed straight ahead, so I asked if he was alright. He then chuckled and responded that I was not the first person to ask him that this week but he was just praying.

Another young man then asked him if he was, what I translated to be an evangelical Christian and he said yes. After that the young man sitting right across from me said that he was too; then I, a little too excitedly chimed in letting them know that I too was a believer.

After one of the young men realised that we attended the same Mega church he began to ask me many questions, like when I had been baptised and who first told me about Jesus. As we spoke, this usually very reserved young man listened to my imperfect Spanish as though he were having one of the most interesting conversations of his life. As the conversation continued, he mentioned that he did not go to parties or drink alcohol, and one of the boys nearby in utter surprise asked him if never did at all.

He then calmly explained that he would not allow alcohol to impair his judgement because he is a child of God and would not want to do anything that would hurt or dishonour his father. I could not help but smile at this; listening to him talk about his faith was like inhaling a great breath of fresh air.

His words resonated with me for the rest of the day and I was reminded of Daniel from the Bible, which ironically was also his name. Much like that Daniel, honouring God was his main priority regardless of what everyone else was doing. As the days passed I was not able to interact with him as much but I could not stop thinking about the fact that my dulling iron had gotten a much needed tune up. This was thanks to a conversation that lasted less than 30 minutes.

Sharpened and ready to sharpen

I began to realise that whether or not I had influences like him around me on a daily basis, my devotion was to God and as such I had to be that breath of fresh air for anyone who needed it.

So today I encourage you, as one of my students unknowingly encouraged me, to let your light shine and live in a way that honours God, regardless of your circumstances and whether or not your friends are doing the same thing. 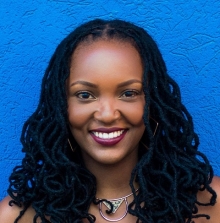 Danielle Jones was born on the beautiful island of Barbados to phenomenal parents. She currently works as an English Language teaching assistant at La Universidad Francisco de Paula Santander in Cúcuta, Colombia. She hopes to be fluent in Spanish very soon, as well as to be an example of the love of Christ wherever she goes.

Danielle Jones' previous articles may be viewed at http://www.pressserviceinternational.org/danielle-jones.html