"It's a dangerous business, Frodo, going out your door. You step onto the road, and if you don't keep your feet, there's no knowing where you might be swept off to." -- Bilbo Baggins to his nephew Frodo Baggins, from J.R.R. Tolkien's The Lord of the Rings.

Normally, the first month of a new year is spent creating New Year's Resolutions and working toward being healthier, more productive, spending more time with our families, being more creative, being more positive, etc etc. The goal we seem to aim for is to ultimately: be a better person.

But this year, I'm not buying into the mentality.

Instead, I'm choosing to put my focus back where it should be. On God.

I'm a missionary, so this shouldn't be hard, right? But, I'm also a filmmaker and writer and an aspiring actress. Finding room for God can sometimes be difficult. Especially, when I come home at the end of a long day and just want to curl up on the couch and watch a movie or read a good book. Or sleep!

One of the reasons I'm passing on making a list of resolutions is because I often create an unrealistic goal for myself: learn ten new languages, take lessons in modern dance, ballet, jazz and hiphop, go to acting classes and take voice lessons, read 100 books in a year, write six novels, make twelve movies. Produce seven plays.

These are all good things, but in my hype and determination I shoot for the moon and don't even end up in the stars.

I'm not saying you shouldn't go for your dreams. Write the resolutions if it inspires you, but remember what's most important.

All my life, I've been told the Big Story God had for me would be impossible without him. It made me feel important to God that he wanted to keep me so close and give me such a huge story.

I was going to star in an epic!

Then life happened. The journey started. The road got bumpy and I wished I'd listened a bit more to Bilbo Baggins who warned Frodo to keep his feet, because there really is no knowing where you might be swept off to.

What I realized is, when my focus was on the New Year's Resolutions I thought making the list was half-way to living that life and not only the start. I wanted it now as so many of us in the microwave generation do. So when it was harder and took longer, or even when I failed I let guilt take over.

My focus was on the impossible goal.

Not where it should be.

That's why this year, I'm taking a different approach. I'm not making the list of resolutions because I know if I fix my focus on God and getting to know him more I'll actually reach better goals and become a, truly, healthier person.

It'll happen by osmosis. Not because I don't still try to go for my goals, but because I will see all my goals through a filter of love and truth. I can still shoot for the moon and instead of only landing among the stars, I'll pass this galaxy and go to the next.

Do you understand what I mean? I'm not saying I'll get my goal or even reach it. I'm saying I'll discover the better thing. The richer life.

When God told me I was to pursue acting and filmmaking, I thought that meant going to Hollywood. I thought he'd help me get my own star on the Walk of Fame.

I could see myself kneeling on the pavement and pressing my hands into the soft cement, with a crowd of fans and paparazzi taking my picture. And like most kids, I'd stand in front of my mirror, hold a Barbi or my hairbrush and thank the Academy again for my fourth consecutive Oscar for Best Actress.

And then God told me to move to Australia. I thought maybe it was just a detour on the way to Tinseltown. A blip, so to speak.

But, that "detour" has lasted almost nine years.

It wasn't until a few years ago that I realized this wasn't the blip. This was the Big Story God had for me and I needed to stop seeing it as temporary.

It was then I looked back on the journey so far and saw how much more rich my life was. No, I didn't have my own star on the Walk of Fame, but I had a family of filmmakers who I could trust and do life with. I was living as a filmmaker and actress and writer.

Not aspiring anymore, but doing it. Living it.

And when I looked closer, I realized time and time again, all the films I'd worked on, all the stories I'd gotten to write had one thing in common. They came about when I stopped striving to be a better person and when I focused in on loving God and getting to know this amazing and mysterious being who liked to create as much, and even more, than I did.

He brought them into my life.

When we put our focus in the right place, on God, there's more freedom for him to create the BIG Story in our lives, the epic adventures.

It actually makes me see Bilbo's comment in another light, like he was excited to tell Frodo to watch where his feet took him. Because with God, there really is no knowing where you might be swept off to. It's all part of the Big Story God wants to tell with our lives and it can only happen if our focus is fixed on him.

It was a new revelation and I want to dive in head first.

Are you up for the adventure? 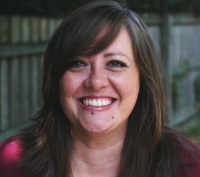 Charis Joy Jackson is working as a full-time missionary with Youth With A Mission (YWAM) a non-profit organization in Queensland. During the day she makes movies and in her spare time is writing a novel. www.charisjoyjackson.com

Charis Joy Jackson's previous articles may be viewed at http://www.pressserviceinternational.org/charis-jackson.html