As we approach the end of January, most people will have made their New Year's resolutions and a large proportion of them will have either forgotten them, or already broken them.

I worked for a man once who had a saying that accurately sums up the reason why 98% of people fail to keep their resolutions. He used to say: "Nothing changes until something changes."

Like most profound sayings, this one seems obvious. (It sounds a bit like a Homer Simpson "D'oh" moment). But when you look at the heart of these words, they are quite deep.

For the equilibrium to shift, something must change. In chemistry it may be another chemical compound added to a mixture that sets up a reaction. In physics it may be a force acting on a system to alter it in some way.

Taking this principle outside the realm of science, in day-to-day life if you try to cook food, the raw ingredients will not transform into an edible meal until you change it by adding heat. A car will continue on a straight path until you turn the steering wheel.

I am sure you can come up with numerous other examples that follow the principle where things will remain the same until something changes.

And this is why most people fail to keep their New Year resolutions. They have a desire to change, such as to eat less, drink less, exercise more and so on, but they do not make any changes to bring about the results they desire. That is, "Nothing changes BECAUSE nothing changed!"

Good examples from the Bible

The Bible gives us a few good examples of this principle too. The most obvious one is repentance.

As Christians, our desire (resolution) is to please the Lord. But because we are human, we sometimes fail. Rather than just give up as failures though, the Lord has given us the opportunity to repent and to turn again and so get back on the right path.

It is interesting to note that the word "repent" is translated from the Greek word "metanoia," which literally means to "change your thinking." When we do change our thinking and then act on those changes, we change, we repent and we are forgiven.

Another example worth noting is seen in Luke chapter 6 verses 46 to 49.

"Every one who comes to me and hears my words and does them, I will show you what he is like: he is like a man building a house, who dug deep, and laid the foundation upon rock; and when a flood arose, the stream broke against that house, and could not shake it, because it had been well built.

But he who hears and does not do them is like a man who built a house on the ground without a foundation; against which the stream broke, and immediately it fell, and the ruin of that house was great."

Just like those who make New Year resolutions, but do not follow through on their vow to themselves, a person who "hears" the words of the Lord but does not "DO" them will fail.

When we come to Jesus Christ, we need to build a solid foundation in the Lord. We "hear" and learn His words and His teachings as we grow, but until we actually put them into action in our life, they do not bear fruit.

On the contrary though, we see that those who DO the words of the Lord are like a house built on a strong, stable and solid foundation. When adversity strikes or the storms of life erupt around them, they do not fall and they do not falter because they are founded on the Rock of Jesus Christ.

So too with ourselves. If we want things to change in our lives, then we have to be prepared to make the necessary changes to facilitate change. Change comes only when something changes.

So if you want to shift that extra weight, run that extra mile, improve your situation or be founded on Jesus Christ more fully, remember: Nothing changes until something changes. 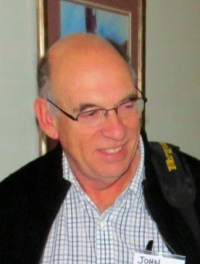 Since retiring from work, John Lemmon now spends his time teaching, preaching and writing about the word of God, online and offline, answering God's call on him to "Speak to my people." John and his wife Colleen travel all over Australia and you will often find him playing guitar or ukulele outside their caravan somewhere in the Great Outback. You can connect with John on Twitter (@JohnBLemmon) or on his Christian Bible study blog (freegiftfromgod.com/blog).

John Lemmon's previous articles may be viewed at http://www.pressserviceinternational.org/john-lemmon.html