"How do you catch the stars?" she asked.

The childish voice lisped the question. The little toes curled in the soft grass. The curious eyes captured the wonder of glinting diamonds flecked in a darkening sky.

But I could not answer. And so I chose to reply instead.

"You can't catch the stars."

I buttoned my voice into my best 'I-am-the-sensible-adult-in-this-conversation' tone.

"You can't catch the stars," I repeated. "They're too far away. Too untouchable. Too, well... too much."

And with that the conversation was closed. But her mind was not, and she spoke again into the velvety darkness.

"But I meant, how do YOU catch the stars."

I raised a mature eyebrow, as she continued, undeterred: "Because sometimes I do. Sometimes I come outside at night... just to catch them."

There was no condemnation in her tone. No judgement of my rational disbelief. Just a calm, factual statement of impossibility.

There was a pause while she wandered and I wondered.

"So," I adjusted my collar to fit a 'mildly-interested-but-still-confident-in-my-superior-knowledge' tone, and dared to return the question. "So, how do YOU catch the stars?"

She glanced at me sideways, smiled patiently, lifted chubby fingers to twirl in the silvery glow.

"I catch the stars with my hands."

And with that she was off, skipping through the inky tendrils of night, dancing and giggling beneath the ebony froth of the sky, chasing and grasping and catching the stars with tiny hands of joy.

I watched her and I stood—frozen. Awed. Caught on that narrow trapeze wire between logic and yearning.

Where did I lose the wonder? When did I stop revelling in the delight?

Somehow, somewhere, the daily grind had worn down my pleasure in the mysteries and beauties of the big wide world. The heavy weights of sorrow and effort and discouragement had beaten back my imagination. Distraction and pride had tried to extinguish the spark of pleasure that used to colour everything around me.

"You can't catch the stars."

My words came back to slap me, shoving common sense right into my face.

But it was too late.

Already, my heart was quivering with the first notes of anticipated delight. My mind was casting aside its veil of cold, hard reason. I longed to dance with her beneath the sky. I longed to see whatever kaleidoscope of light was playing with the night's dark tresses.

And as I stood, wavered in simultaneous fear and longing, I saw it.

A shooting star, falling from the heavens.

It fell, curving and glowing in a fierce and glorious descent. Painting its blazing light across a black canvas sky. Brushing the star dust from its trail and shaking the clouds with tinkling music.

Down, down it fell; closer and closer still.

Its glow lit up my eyes. Its beauty caught my breath. Its wonder slowly lifted my hand to catch its fall.

And suddenly I was there.

Lost in the moment, captured in the magic, defying the logic and tasting the illogical wonder. Gasping in pure delight and sweetness and 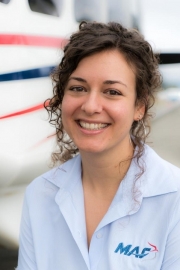 Emma is an Italian-South African with a New Zealand passport, living in Papua New Guinea. After years of running a puppet ministry and directing student choirs, she currently serves with Mission Aviation Fellowship. Emma's deep joy is in writing, music, playing with her ginger cats and finding God in unexpected places.

Read Emma's creative expressions at girlkaleidoscope.wordpress.com or follow her PNG adventures at pngponderings.wordpress.com