There are moments in life when we often question our existence and our purpose in life, especially when it comes to our own significance in relation to others around us. Often, this becomes more important, such as at the beginning of a new year.

Recently, at a conference I attended in Bangalore, South India, I met a number of new people and was able to connect with a few people from the UK, as well as some Australians and Indians I hadn't met before. Yet somehow or other, the conversation seemed to weave itself towards marriage. Not being a married man myself seemed to make matters worse, especially since I decided to attend one of the sessions, aptly titled Marriage on the Mission Field.

Of course, I probably had it coming, but had decided that these conversations hadn't popped up by mistake, so I decided to go along. During the session, one of the session leaders mentioned the difference between arranged marriages and love marriages, which she referred to as "self-arranged". Commenting to a fellow colleague, I half-seriously, half-jokingly whispered, "I guess the other alternative is "arranged by love". We both laughed at the irony of my statement.

But looking back on the conference, and even 2016 as a long year of both ups and downs, I find myself seeing a year arranged by love. A year in which, through it all, there were moments where at my deepest points of longing that I found the love of God enveloping me. In which I was able to look forward to a brighter day. In which I also was able to share the love of God with others.

Recently at work, I was able to share with some of my colleagues about my week in the village, where I had no access to Wi-Fi and limited phone connectivity, for a week. Now, perhaps that may be normal for some, but as an IT professional, that was pretty hard for me to get over. But amazingly, as the week went on, I found there was always something to do, someone to connect with, some constructive activity to engage in. And when I was finally asked on the 25th of December to speak in front of a sea of eager faces of people who had come to hear me speak, I stood in awe of the blessing of life, just to be present in a place that welcomed me as much as I welcomed them.

For some, choosing to believe a situation will get better seems to work, but often with short-term results. At a presentation I was at recently, one of the images on the PowerPoint slide the presenter was referring to was a tad too small. The presenter promptly exited out of 'presentation mode', and proceeded to zoom into the image on the screen, instead of enlarging it.

Switching back to presentation mode, he asked the audience if the image was any better, to which the audience responded with a chorus of "yes!" My friend sitting opposite smiled at me knowingly, and said, "classic example of the placebo effect". Luckily, my friend was a medical doctor, so piped up, in typical Australian fashion, "it makes no difference!" Of course, no one heard him.

But we often choose to feed ourselves a placebo that makes no difference to our situation in life; despite the fact that a placebo, by definition, is meant to have a psychological benefit, rather than any real psychological effect. How do we get past our own flaws? It's a difficult thing to do. But when we discover a love that covers over our multitude of sins, we begin to understand the bigger picture.

Imagine a person who had been born into the world with a single destiny: to save all of humanity. Now think of all the planning and effort that had to go into that single event in time—the people that had to prepare for his coming, the place where he had to be born, and to live, and to encounter others, the plan that had to come to fruition.

And all this had to be exactly as it had been envisioned to come to be. Fast forward over 2000 years. God's Son came to do exactly that, and often, we fail to realise how much it took for it to happen. But when we see that love drove Him to do it, we see the wonderful orchestration of both time and place, and we are able to see that love arranged for this to be, it makes it all the more believable.

Are we able to embrace the arrangement of love? 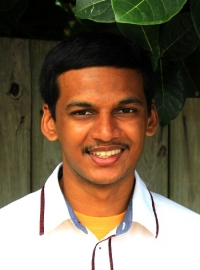 A third-culture-kid born in Australia to Indian parents, Joseph returned from California where he was studying theology at Fuller, and recently began working for a BAM initiative in South India; his love of books and writing has now drawn him to PSI.